(RNS) — Each week Religion News Service presents a gallery of photos of religious expression around the world. This week’s photo selection includes Orthodox Easter, Holy Fire, nearing the end of Ramadan and more.

Note: RNS is expanding Photos of the Week to include reader photos. Please submit current photos of your practice of religion, spirituality or beliefs HERE. We look forward to sharing your photography with the RNS community. 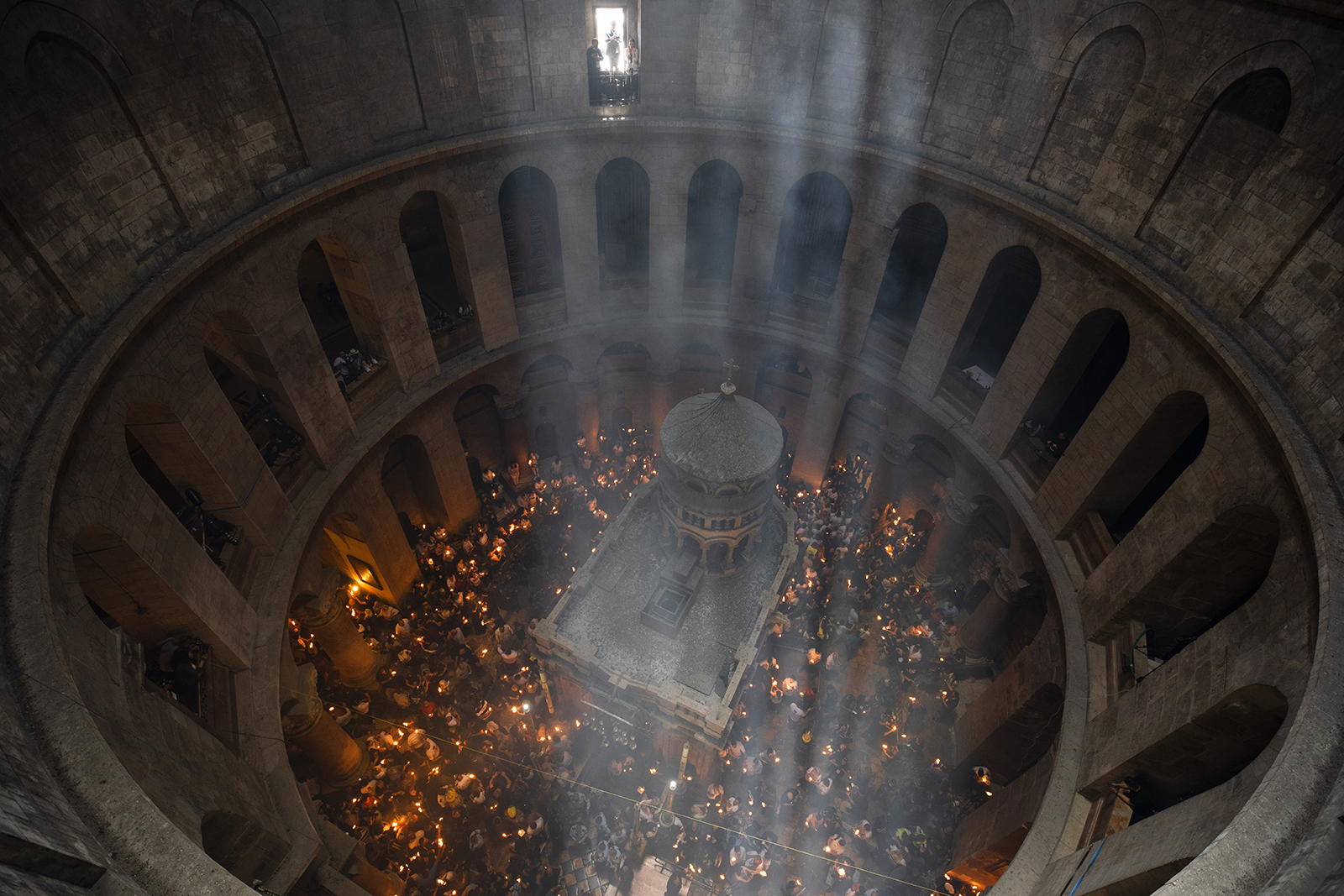 Christian pilgrims hold candles as they gather during the ceremony of the Holy Fire at Church of the Holy Sepulchre, where many Christians believe Jesus was crucified, buried and rose from the dead, in the Old City of Jerusalem, Saturday, May 1, 2021. Thousands of Christians have gathered in Jerusalem for the ancient fire ceremony that celebrates Jesus’ resurrection. (AP Photo/Oded Balilty) 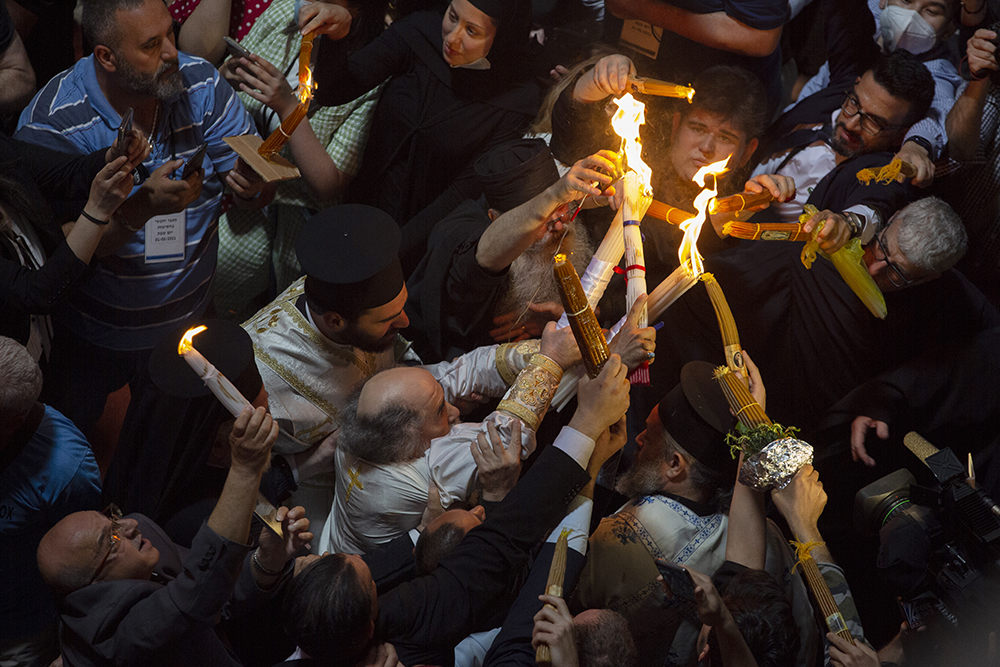 Greek Orthodox Patriarch of Jerusalem Theophilos III, center left, holds candles for Christian pilgrims during the ceremony of the Holy Fire at Church of the Holy Sepulchre, in the Old City of Jerusalem, Saturday, May 1, 2021. Hundreds of Christian worshippers took advantage of Israel’s easing of coronavirus restrictions Saturday, packing the Jerusalem church revered as the site of Jesus’ burial and resurrection for an ancient fire ceremony ahead of Orthodox Easter. (AP Photo/Ariel Schalit) 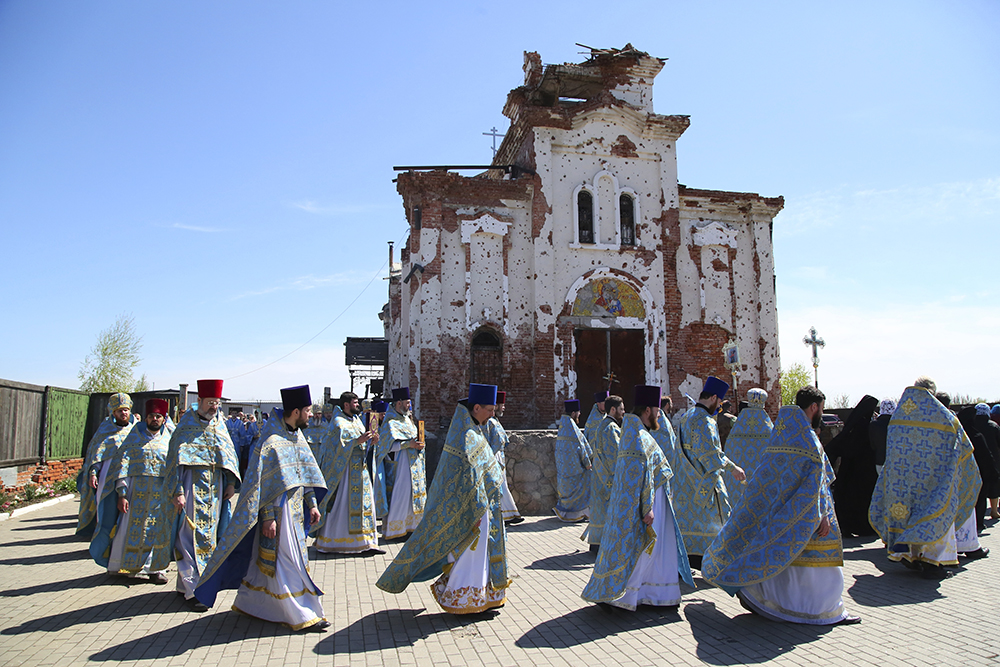 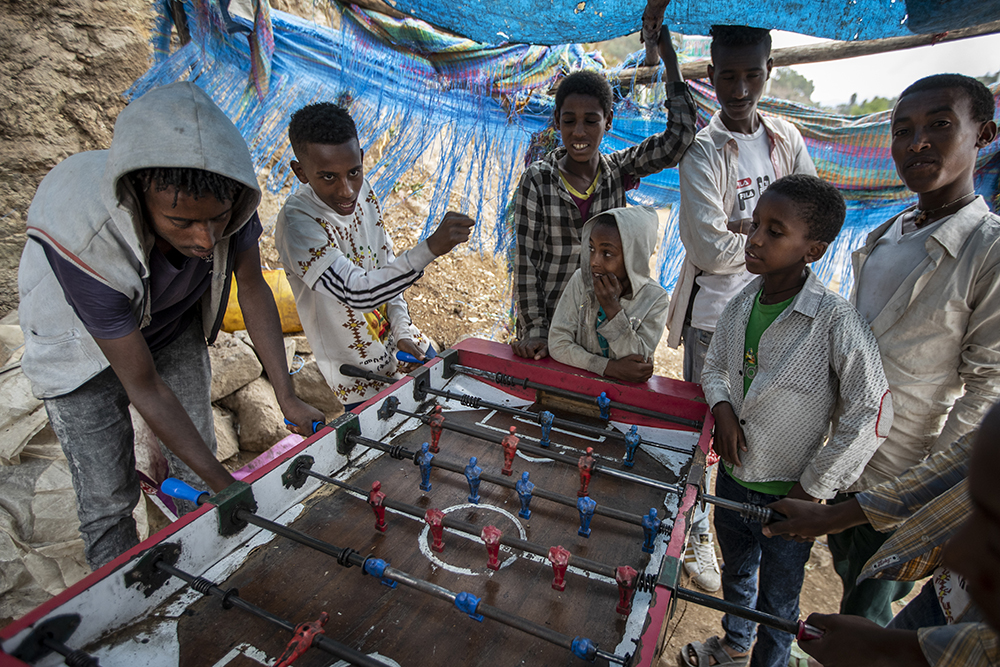 A child punches the air after scoring a goal while playing table football on the street against other children and young men, as Ethiopian Orthodox Christians celebrate Easter Sunday, in Gondar, in the Amhara region of Ethiopia, Sunday, May 2, 2021. (AP Photo/Ben Curtis) Buddhists carry lanterns to celebrate for the upcoming birthday of Buddha on May 19, at the Jogye temple in Seoul, South Korea, Thursday, May 6, 2021. (AP Photo/Lee Jin-man) 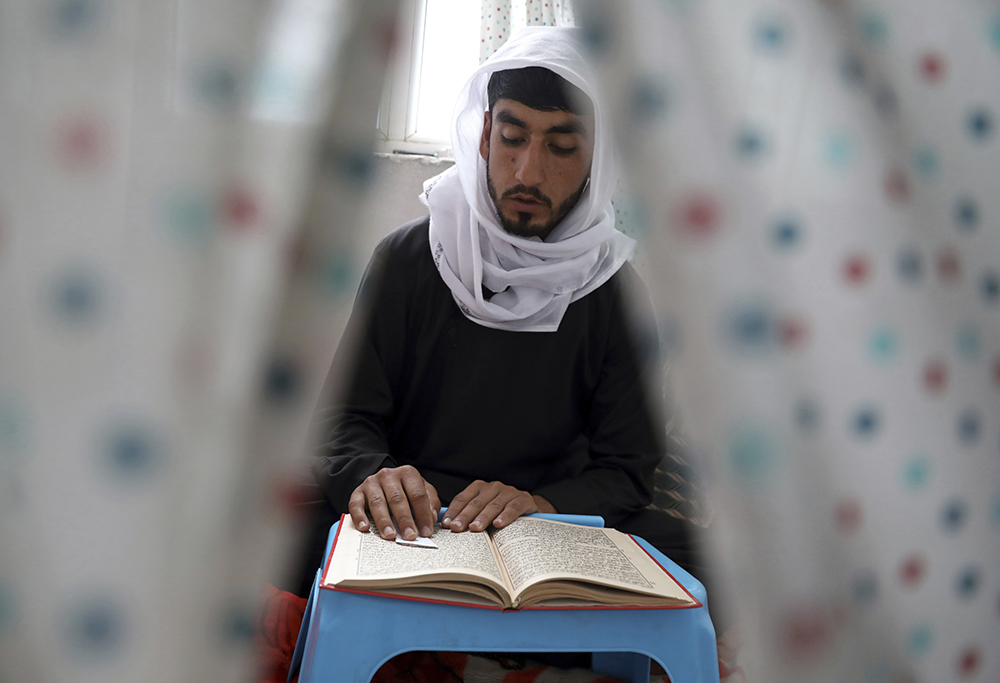 A Muslim man reads the Quran in a mosque during Itikaf, which requires staying in seclusion in a mosque to read the Quran and pray during the last ten days of the Islamic fasting month of Ramadan, in Kabul, Afghanistan, Tuesday, May 4, 2021. (AP Photo/Rahmat Gul) A demonstrator chants slogans during the annual Al-Quds, or Jerusalem, Day rally, in Peshawar, Pakistan, Friday, May 7, 2021. Jerusalem Day began after the 1979 Islamic Revolution in Iran, when the Ayatollah Khomeini declared the last Friday of the Muslim holy month of Ramadan a day to demonstrate the importance of Jerusalem to Muslims. (AP Photo/Muhammad Sajjad) 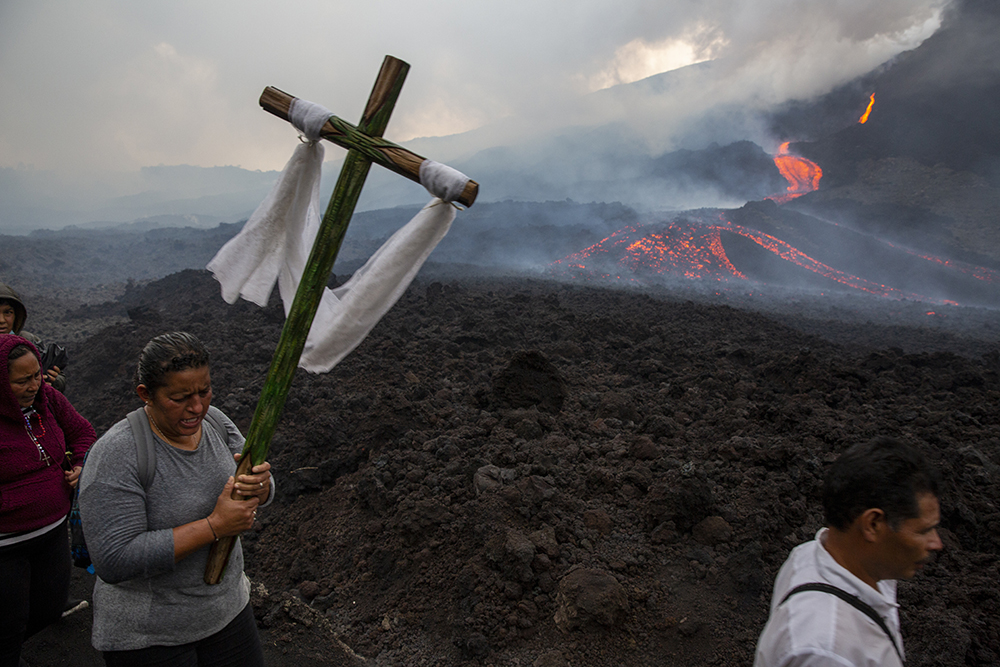 A woman carries a wooden cross during a pilgrimage to pray that the Pacaya volcano decreases its activity, in San Vicente Pacaya, Guatemala, Wednesday, May 5, 2021. The volcano, just 30 miles south of Guatemala’s capital, has been active since early February. (AP Photo/Moises Castillo) 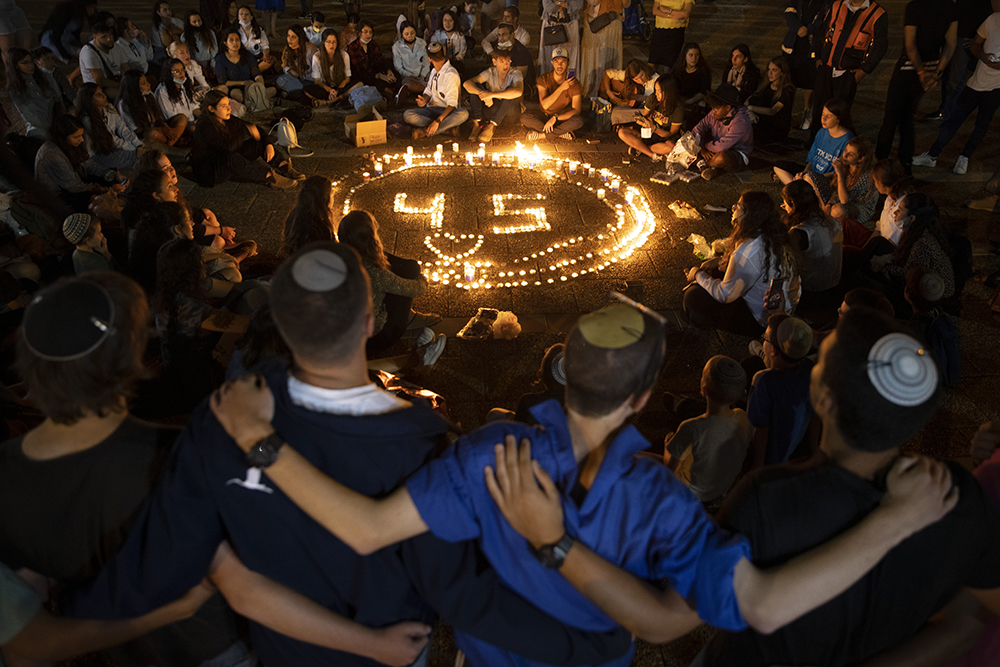 People gather around candles during a vigil in memory of the 45 Orthodox Jews killed in a stampede at a religious festival in northern Israel on Friday, in Tel Aviv, Israel, Sunday, May 2, 2021. The stampede early Friday cut short the annual festival of Lag b’Omer on Israel’s Mount Meron. It was one of the country’s deadliest civilian disasters. (AP Photo/Oded Balilty) 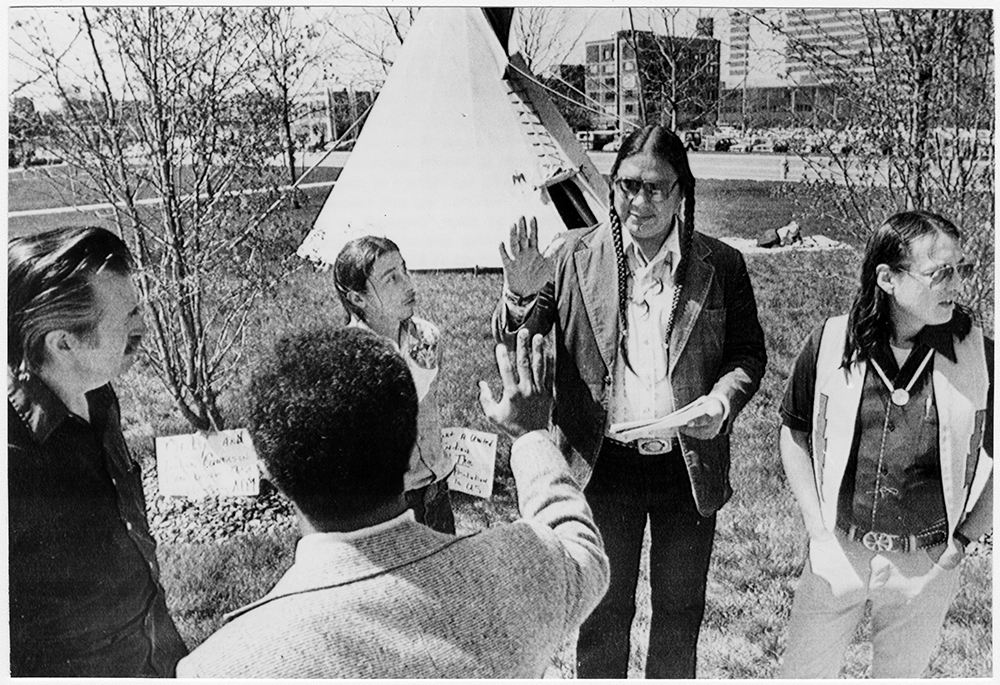 Native American Indian leaders John Thomas, from right, Mike Haney and Frank Drennon talk to delegates to the United Methodist Church General Conference, seeking their backing for Indian rights, outside the Indianapolis Convention Center on Apr. 23, 1980. Coincidentally, UMCGC participants later adopted a charter for racial justice policies in an interdependent global community. The document, which originated in the church’s women’s division, has been endorsed by the women’s groups in every annual (regional) conference. It asserts that “the institutional church, despite sporadic attempts to the contrary, also still discriminates,” and that “the racist system in the U.S. today perpetuates the power and control of those of European ancestry.” The statement also called for support of “nomination and election processes which include all racial groups employing a quota system until the time that our voluntary performance makes such practice unnecessary.” RNS archive photo. Photo courtesy of the Presbyterian Historical Society. K’ekchi Indian women kneel as they pray for the sick following a morning worship service at Jerusalem Baptist Church in the Pocola Valley of Guatemala, in March 1980. Joining in the service (in background) are several participants from the Southern Baptist-sponsored seminar on work with indigenous people which met in nearby Coban. Jerusalem Baptist Church was one of two congregations in the late 1960s from which Baptist work among the K’ekchis grew to more than 67 congregations. RNS archive photo by Leland F. Webb. Photo courtesy of the Presbyterian Historical Society. 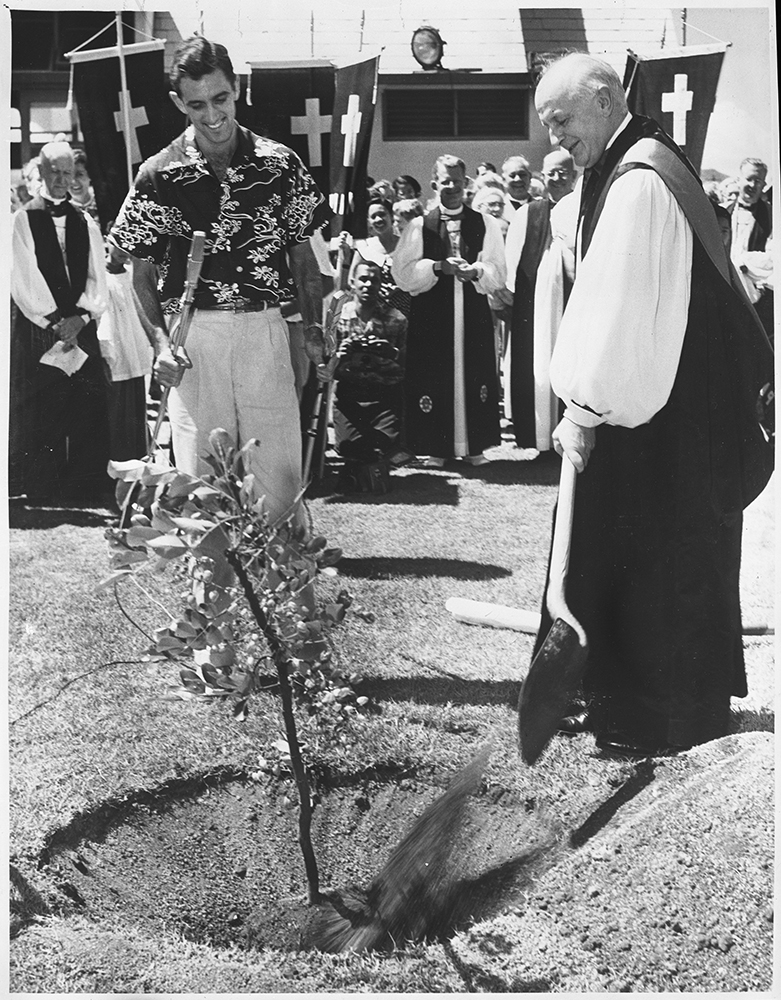 The Rt. Rev. Henry Knox Sherrill, Presiding Bishop of the Protestant Episcopal Church, plants the “Presiding Bishop’s Tree” in Honolulu in 1955, during the church’s 58th Triennial General Convention. The Rainbow Shower tree was planted as a living symbol of the Episcopal Church. It was one of 43 trees forming an avenue of shower trees. RNS archive photo. Photo courtesy of the Presbyterian Historical Society.