At the Indian Youth Congress (IYC) control room in Delhi’s Raisina Road, the phones don’t stop buzzing. Ten volunteers have their task cut out – some scour Twitter for the #SOSIYC hashtag and identify requests for oxygen, medicines or hospital beds that are to be forwarded to their seniors, while others keep refreshing the Delhi Corona app for updates on the status of empty beds.

Behind IYC President Srinivas B V, who has emerged as a point person for those seeking help during this Covid surge, is a small army of volunteers who keep the gears turning behind the scenes.

Each volunteer in the control room is either looking into the computer or on the phone, or sometimes both at once. Not all requests can be fulfilled, so they narrow them down based on available resources at the time and forward them to Srinivas and IYC national convener Manu Jain, who reach out to hospitals or oxygen suppliers.

Srinivas, who operates mostly from his office in the next room, then connects to hospitals or ground volunteers – there are 100 in Delhi; 10 in the control room and 90 on ground. 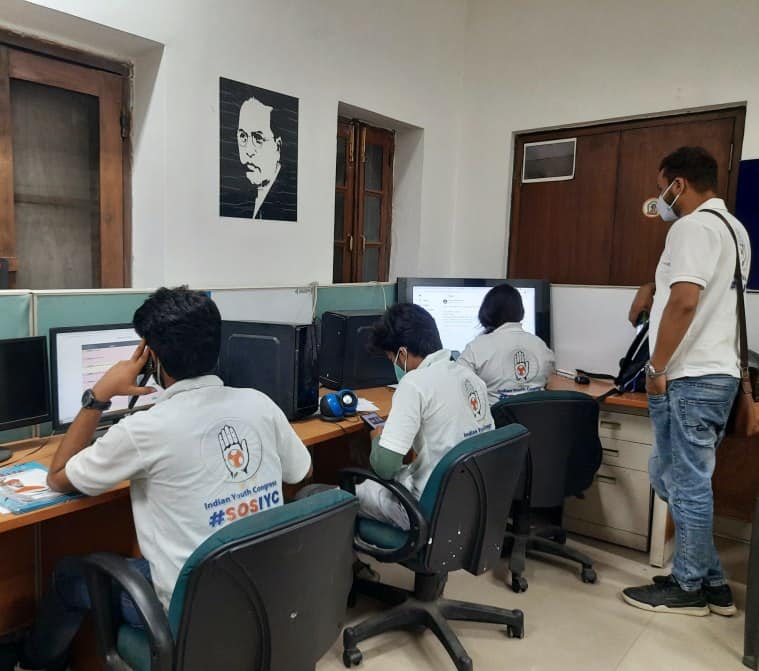 Each ground volunteer is assigned one of Delhi’s 11 districts. Karun Paswan (27), a control room volunteer who keeps a tab of bed status in Delhi’s hospitals, reaches out to the facility or a volunteer from the respective district to check if the vacancy shown on the website or app is still relevant.

Meanwhile, Priyanka Sarsar (31) scrolls through Twitter and to assess if requests coming in can be fulfilled, asking Karun if ICU or oxygen beds are available.

While scrolling, Priyanka reads a message about a low-income family unable to foot their hospital bills, and another who has nobody to perform a cremation since they have all tested positive. She takes photos of the requests and sends them to Srinivas, Manu and WhatsApp groups with volunteers on ground. Priyanka herself recovered from Covid recently, and rejoined work on April 28.

Say Srinivas and Jain, who are both in-charge of the SOS programme: “Of late, we have been getting a number of requests from families who need help with cremations as the rest of the family has Covid. We have gone to the ghats and helped with many cremations in the last few days.”

One such request was from a man in Bengaluru, whose mother had died in Delhi while his father was in the ICU. The team stepped in and conducted the last rites.

In the afternoon, Manu calls a family whose patient’s oxygen levels had dipped to 48%. He tells them he is from Srinivas’s team and will arrange an ICU bed.

However, they can’t help everyone. Srinivas says there have been instances where they have arranged beds, but it was too late. He says he receives calls till 3-4 am and starts working at 7 am.

Oxygen cylinders reach the office from across the country via the IYC’s volunteers in other states. Sanjiv Netan (28) keeps track of requests and coordinates with those who need them.

There are around 1,000 volunteers across the country who perform similar tasks. The control room volunteers come across over 1,000 requests on Twitter every hour. If it is from Delhi, they take cognizance, else they pass it to volunteers from the respective state. Srinivas takes calls from people across the country.

Acknowledging that they can only help a few, volunteers said they do not give anyone false hope. “It takes 30 seconds to comment on social media but at least 8-9 hours to actually fulfill a request,” says Manu.